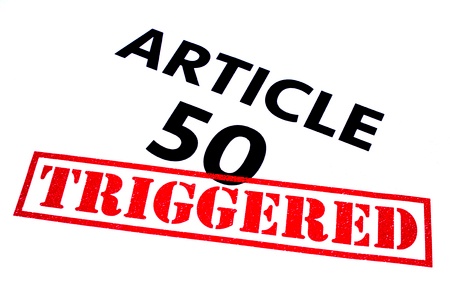 Today sees the historic triggering of Article 50 by the Prime Minster and the start of two years of Brexit negotiations. If all goes to plan, the UK will no longer be a member of the European Union by April 2019.

As warnings of a skills shortage persist and the growth of advertised vacancies begin to exceed the number of applicants, what additional pressure will Brexit now bring to HR?

In some cases, the Brexit effect rippled through recruitment shortly after last June’s result. Online job searches from Eastern Europe in the health and social care sector fell by 17% in the wake of the referendum vote. Last month we reported Mercer’s warnings of an ‘unprecedented labour shortage’ in the event of a hard Brexit and the potential impact a fall in the availability of migrant workers might have on HR.

As well as health and social care, hospitality and agriculture are also expected to be severely affected by any limited access to the EU labour pool. Pret A Manger recently voiced concerns that they would face a ‘staffing crisis’ post Brexit - just one in 50 applicants to its vacancies are reportedly British. The British Hospitality Association also predicted that it might take up to ten years to replace its existing EU staff members post-Brexit.

The public sector faces it's own unique challenges too. A report from the Civil Service Commission ‘The Capability in the Civil Service’ revealed that recruitment competitions in 2015-16 left 34 out or 158 jobs unfilled. Many of those open jobs required specialist digital skills. Two new departments have also been created in response to the Brexit result, placing extra pressure on recruitment.

Concerns have been raised over staff shortages in the teaching profession too as figures show that the number of EU workers qualified to teach in England has more than doubled since 2010. In December, the Guardian quoted Department for Education figures which showed that nearly 5,000 teachers from the EU qualified to teach in the UK in 2015[1].

Staff retention is the bigger priority

But for some businesses, it’s not Brexit that the issue in the next six months but their ability to retain their key staff according to Alexander Mann[2]. A survey found that the biggest concern for nearly one quarter of businesses is how to retain their talent without significant financial incentives. Less than 10% regarded Brexit as their main challenge.

Where does that leave HR?

A number of staffing solutions have been suggested:-

Bespoke immigration : The CIPD outlined ideas for a ‘bespoke immigration system’ which would tighten immigration controls but allow some flexibility for industries affected by a staff shortage. The difficulty will be in deciding which sectors this system might apply to due to the expected high demand for migrant skills. The government has also laid out plans to expand digital skills training post-Brexit to businesses, individuals and charities. Google, Lloyds Bank and Barclays have all agreed to be involved. As we noted last week, the creation of tech jobs is outstripping that of non-digital vacancies and the UK now faces a digital skills crisis.

Diversity, automation and talent management : Mercer’s Workforce Monitor recommends a number of strategies to address a potential skills shortage including:-

For HR, one of the most straightforward ways to streamline recruitment processes is the automation of basic functions so focus is placed on talent sourcing and retention. Investment in HR technology will enable employers to enhance talent management strategies but at present less than half reportedly use applicant tracking software during hiring.

Relocation : A further strategy proposed by Mercer is relocation. A number of organisations threatened to relocate staff in the event of Brexit but they appear to be restricted to the banking sector. Following the example of HSBC, UBS and JP Morgan, Goldman Sachs last week confirmed that it would be increasing its headcount in Frankfurt and Paris as a response to the triggering of Article 50. The reduction in London based jobs will, however, be 'in the ‘hundreds’ not the thousand or more originally predicted.

In January, Microsoft also hinted that it might withdraw from the UK, but tech giants Google, Amazon, Facebook and Snapchat have all announced the creation of UK based jobs since the Brexit vote.

As the wait for the triggering of Article 50 is almost over, the pressure is on employers to create effective talent acquisition and retention strategies to enable them to compete in a post-Brexit economy. Support your business with recruitment software that helps you to hire better people faster.

For a recap on how Brexit has affected hiring prospects since the referendum vote, download our whitepaper Brexit : Reactions & Hiring Trends.

Our in-depth sector reports covering sectors such as healthcare, tech and the public sector are available to download here